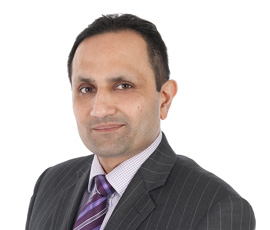 Amandeep (‘Aman’) is a Partner in the criminal litigation department and is the Head of the Serious Crime Team at Kangs Solicitors.

An exceptional litigator with over two decades of experience, Aman joined the firm in 2011.

Since qualifying as a Solicitor in 2000, Aman has worked exclusively in criminal and regulatory litigation. He has advised and represented many hundreds of clients nationally in relation to serious and complex criminal investigations.

He represents both corporate and individual clients in relation to criminal allegations ranging from financial misconduct matters of fraud and money laundering to grave allegations of murder and historic sexual abuse.

Aman’s main areas of work include:

Aman prides himself on his meticulous case preparation and conducts cases from the initial investigation stage to include representation in interviews under caution to court proceedings before the Magistrates’ Court, Crown Court and Court of Appeal.

Aman has extensive experience advising both corporate organisations and individuals in relation to investigations and proceedings brought under the Proceeds of Crime Act 2002 (POCA 2002) including:

He is a highly sought-after defence solicitor in this area of work and a selection of his cases is listed below:

R v G: Warwick Crown Court
Acquitted of Murder and Manslaughter. Represented one of two accused of the murder of a closed family relative.

R v G:  Birmingham Crown Court
Acquitted of Murder and Manslaughter. Represented one of three accused of the murder of a friend with whom they had been drinking earlier in the day. Our client was alleged to have been involved in a vicious group attack upon the victim which resulted in his death.

R v M: The Old Bailey
Represented the husband of the couple accused of murdering their French nanny and then attempting to dispose of her remains by barbecuing them in the garden of their property.

R v G: Birmingham Crown Court
Acquitted of Conspiracy to Murder. Represented one of three defendants alleged to have been involved in planning to carry out an assassination / revenge shooting with a firearm.

R v K: Warwick Crown Court
Secured an acquittal for a client charged with the murder of a child. Several medical experts were instructed which resulted in no evidence being offered by the Prosecution.

R v A: Birmingham Crown Court
Acquitted of Murder. Our client was the first person to be extradited from the UAE to the United Kingdom to face a murder trial.

R v D: The Old Bailey
Represented a defendant charged with Murder and Possession of a Firearm arising from the activities of two rival Turkish gangs in London.

A small sample of the serious criminal trials in which Aman has acted for the client is listed below:

R v C – Maidstone Crown Court
Represented a defendant charged with the Evasion of Duty on cigarettes in the sum of £16million.

R v D – Canterbury Crown Court
Represented a defendant charged with the Evasion of Duty on alcohol in excess of £50million.

R v N – Birmingham Crown Court
Represented a defendant in a large-scale conspiracy to import in excess of 100 kilos of heroin into the United Kingdom.

R v F – Birmingham Crown Court
Secured acquittal of a defendant charged with large scale Conspiracy to Supply Class A Drugs. The instructions to supply the Class A Drugs came from a serving prisoner.

R v R – Birmingham Crown Court
Secured an acquittal of a defendant for possession of a firearm recovered from a car he was driving.

Aman has a wealth of experience in criminal and regulatory litigation. He applies his skill, dedication and determination to provide an outstanding service to all clients from the initial stages of an investigation through to court proceedings.

He adopts a fearless approach to representing his clients and protecting their interests. As a result, he has a reputation for building a strong rapport with his clients and earning their trust.

Aman is available to meet with clients at any of our offices in Birmingham, London and Manchester. Alternatively, he is happy to provide a no obligation initial consultation by telephone or video conferencing.